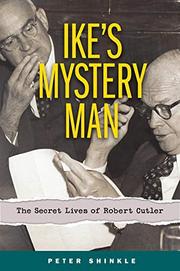 The Secret Lives of Robert Cutler

Cutler, journalist Shinkle’s great-uncle, served in this capacity from 1952 to 1955 and again from 1957 to 1958. Eisenhower later appointed him executive director of the Inter-American Development Bank, which was established to fight communism by encouraging economic development in Latin America. Although quite the bon vivant in Boston, during his stint in Washington, D.C., Cutler shunned the limelight, leading him to be dubbed "the Mystery Man of the White House." One reason for remaining in the shadows was that Cutler was gay. He and several highly placed gay friends somehow survived the dragnets of the Joseph McCarthy era's "Lavender Scare," when gays were driven from government as security risks. Cutler was never outed during his lifetime, though he took no extraordinary measures to conceal his lifestyle and showed little concern for his job security. In his multivolume diary, he poured out his unrequited desires for a committed relationship with a much younger protégé in florid and extravagant language. So oppressive were Cutler's emotional demands that they became smothering, interfering with friendships and at times evidencing an alarming instability. In his debut book, the author alternates between these two secret lives; neither portion is notably successful. The coverage of Cutler's National Security Council days includes such significant events as U.S.–sponsored coups in Guatemala and Iran, but the narrative is straightforward and dry; if it contains any new revelations, Shinkle does not highlight them. He describes Cutler's various rendezvous with gay men in gaudy detail, but to no apparent purpose. Cutler's diary entries illustrate the depths of his feelings for these men but never broach subjects of wider significance—e.g., the predicament of a gay man in a hostile governmental and social culture.

An important man in his day, neither of Cutler's secret lives now appears sufficiently interesting to merit the attention of 21st-century readers.