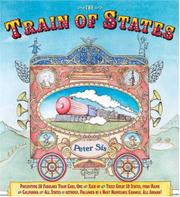 THE TRAIN OF STATES

Combining the author/illustrator’s stated “love for [his] adopted country with [his] admiration for antique circus wagons,” this offering serves up 50 cars, one for each state, and “a most marvelous caboose” (Washington, DC). Each meticulously decorated car—ordered by each state’s admission to the Union—includes such standard details as flag, state critters, and nickname, as well as various notable state residents. To make sure the most important information doesn’t slip by, a panel at the bottom includes the state tree, flower, and bird (replicating the facts above), capital, and a random factoid (“North Dakota has 63 National Wildlife Refuges, more than any other state”). State-fact purists will no doubt be peeved to find that mottoes properly expressed in languages other than English are translated with no indication of such (New Mexico’s Latin “Crescit Eundo” becomes “It grows as it goes”). It’s certainly a very pretty caravan, Sís’s propensity for itty-bitty detail leading to some highly ornate wagons, but the overall impression of the whole is a big “So what?” One can’t even fall back on the standard “Good for reports.” (Picture book/nonfiction. 6-10)