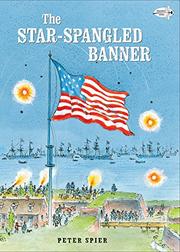 Peter Spier has put together a real long-may-it-wave 4th of July celebration, with over 100 "flags of the American Revolution, those of its Government and its Armed Forces, and those of the United States of America" for endpapers, and with the music and all four verses of Francis Scott Key's song, a reproduction of the original manuscript, a map of the Battle of Baltimore, and a three-page background note on the war and the song's genesis appended. The red, white and blue illustrations, with the detailed fidelity of Spier's nursery rhymes but in the oversized format of his more recent books, move from the ships and forts and cannons and rockets of the 1814 battle to blander views of documents, government buildings, churches, modern cities, etc. (even a smoky cluster of refineries and skyscrapers, oddly matched with the words "Blest with vict'ry and peace. . ."); in between he goes all out with a field of poppies and crosses and a statue of the Iwo-Jima flag raising. Spier omits Key's more vindictive third stanza from the body of the book and his scenes of slum clearance, field plowing, lab research and moon walking to illustrate "Then conquer we must, when our cause it is just," must be admired as a nifty maneuver; chiefly this is for patriots who believe that what we need now is more flag waving.