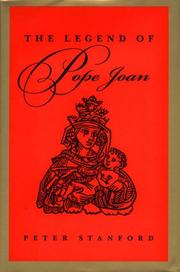 THE LEGEND OF POPE JOAN

In Search of the Truth

A flimsy argument for the existence of a female pope in the ninth century. Stanford, former editor of London’s Catholic Herald and author of The Devil: A Biography (1996), has resurrected a wonderful legend: that a young medieval Catholic woman disguised herself as a man, became educated, climbed the ecclesiastical ladder and served as pope for more than two years, only to be unmasked when she gave birth during a public processional. But Stanford too doggedly persists in his determination to see historical evidence for Joan’s papacy where almost none exists. His case is built upon circumstances, and he rashly jumps from possibility to fact. No mention of Joan is made in any extant source until the mid-13nth century (though Stanford gamely tries to persuade us that an 11th-century text that does not mention Joan by name is, in fact, referring to her). Stanford treats the 1265 Polonus chronicle as gospel truth—for example, in the second chapter, he notes that Polonus claimed the son Joan bore in the street later went on to become bishop of Ostia. Eighty pages later, Stanford writes that because we “know” that Joan’s son became bishop of Ostia, it makes sense that Joan was buried there. This kind of shoddy detective work only builds a house of cards. Some of this is excusable by Stanford’s own obvious enthusiasm for his subject matter; he so clearly wants the reader to believe what he has come to accept as historical truth. This eagerness blinds him to the far more provocative questions he neglects to raise until the conclusion of the book: why is Joan still revered by so many, including proponents of women’s ordination, transvestites, and anti-clericalists? What is at stake here for the Catholic Church? Why, despite the weak historical evidence, does the legend of Pope Joan persist? Tenuous, inadequate history that overlooks the more salient issues surrounding Joan’s legend. (8 pages b&w photos)