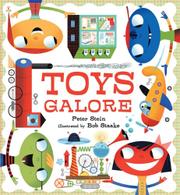 A fizzy yet revealing romp through the toy world.

Though of standard picture-book size, Stein and illustrator Staake’s latest collaboration (Bugs Galore, 2012, etc.) presents a sweeping compendium of diversions for the young. From fairies and gnomes, race cars and jacks, tin cans and socks, to pots ’n’ pans and a cardboard box, Stein combs the toy kingdom for equally thrilling sources of fun. These light, tightly rhymed quatrains focus nicely on the functions characterizing various objects, such as “Floaty, bubbly, / while-you-wash toys” or “Sharing-secrets- / with-tin-cans toys,” rather than flatly stating their names. Such ambiguity at once offers Staake free artistic rein to depict copious items capable of performing those tasks and provides pre-readers ample freedom to draw from the experiences of their own toy chests as they scan Staake’s vibrant spreads brimming with chunky, digitally rendered objects and children at play. The sense of community and sharing suggested by most of the spreads contributes well to Stein’s ultimate theme, which he frames by asking: “But which toy is / the best toy ever? / The one most fun? / Most cool and clever?” Faced with three concluding pages filled with all sorts of indoor and outside toys to choose from, youngsters may be shocked to learn, on turning to the final spread, that the greatest one of all—“a toy SENSATION!”—proves to be “[y]our very own / imagination.”

Clever verse coupled with bold primary-colored images is sure to attract and hone the attention of fun-seeking children everywhere.