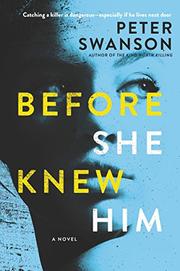 BEFORE SHE KNEW HIM

The latest thriller from Swanson (All the Beautiful Lies, 2018, etc.) is a twisty, fast-paced tale that depicts picket-fence suburbia's seamy, murderous underside.

Hen and her husband, Lloyd, have just left Boston for the tranquil burbs, and things are looking up for her. After a psychotic break sparked by the unsolved murder of a neighbor, Hen is on the mend, her bipolar disorder under control, her optimism resurgent, her career as an illustrator of dark YA books taking off. At a meet and greet she and her husband hit it off, or think they should, with their next-door neighbors Matthew and Mira, the only other childless couple nearby. But when they cross the driveway for a barbecue, the potential for neighborly coziness curdles. Hen notices a little fencing trophy on a shelf in Matthew's office and recognizes it—or wonders if she recognizes it—as one of the mementos the police reported was stolen from the murder scene in the city. When Hen recalls that the man killed was once a student at the prep school where Matthew teaches history, Hen grows suspicious of Matthew—and starts to stalk him. Is this a break in the case or the beginning of another fit of paranoia? And even if it's the former, who will believe Hen's suspicions given her earlier obsession with the case and the hospitalization it led to? Swanson is at his best in exploring the kinship—or what some see as the kinship—between artist and killer, one of the themes of Swanson's great model and forebear, Patricia Highsmith. Swanson isn't quite up to Highsmith's lofty mark, and he succumbs toward the end to a soap opera–like plot-twist-too-far...but for the most part, this novel delivers.