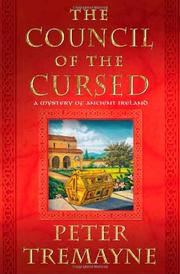 THE COUNCIL OF THE CURSED

Sent to France as advisors to the Celtic church, Fidelma of Cashel and her husband Brother Eadulf find dissension and murder.

Bishop Leodegar of Autun, who is hosting church leaders from various areas of western Europe, is an innovative administrator whose community has recently embraced celibacy, a new departure for the Roman church in 670 CE. Monks living at his abbey have been forced to put aside their wives and children, most of whom are now living at the Domus Femini under the rule of iron-fisted Abbess Autofleda. Fidelma and Eadulf arrive on the heels of a murder: The corpse of Hibernian Abbot Dabhóc has been found in a room with two unconscious clerics, who both deny any complicity in the crime. Leodegar finds it distasteful to have a woman investigate, but Fidelma’s reputation (Dancing with Demons, 2008, etc.) precedes her, and the powerful papal delegate knows her from a former case. A slave trader, a young monk whose love is missing from the Domus Femini, and the passive, carousing local governor’s powerful mother all come under Fidelma’s scrutiny. Suspecting that there is more to this murder than meets the eye, she resists pressure to come up with a quick solution, putting her life in danger to save innocent lives and reveal a complicated plot.

One of Fidelma’s best, and the subject of clerical celibacy is particularly relevant today.