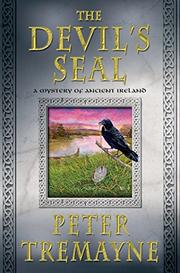 Sister Fidelma of Cashel, nonpareil advocate of medieval Ireland’s law courts, faces one of the hardest cases in her illustrious career.

Fidelma’s companion, Brother Eadulf of Seaxmund’s Ham, is about to receive an unexpected surprise in the form of his younger brother Egric, whom he hasn’t seen in 10 years. But there’s a more sinister surprise as well. Gormán, commander of the king’s bodyguard, and his companions find Egric unconscious and his three fellow travelers—the Venerable Victricius and the two boatmen taking them up the river—dead. All the victims’ possessions have been stolen or destroyed. Fidelma’s brother Colgú, king of Muman, Ireland, receives a message that the arrogant Brother Cerdic will soon arrive as an advance man for a party of clerics, including the equally arrogant Bishop Arwald and the Roman cleric Verax, the pope’s brother. Before they arrive, Cerdic is murdered. So is Rudgal, one of Egric’s attackers, who had claimed when he was captured to have knowledge he hoped to bargain for his freedom. In seventhth-century Ireland as elsewhere, the Church of Rome is still in a state of flux: points of religious differences and politics make for contentious arguments. When the party of clerics arrives, they are evasive about why they’ve come but willing to engage in long discussions about how the church should develop in Ireland. Fidelma and Eadulf are almost killed by a falling statue, and the bodies continue to pile up while Fidelma struggles to unravel a knotty problem, uncover a motive for many murders, and unmask those who are not what they seem.

Not for the first time, Tremayne (Atonement of Blood, 2015, etc.) packs the case with historical information that threatens to overwhelm what in this installment is a very good mystery indeed.