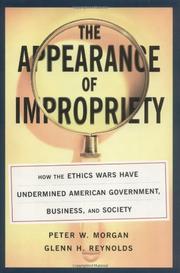 THE APPEARANCE OF IMPROPRIETY IN AMERICA

How the Ethics Wars Have Undermined Government, Business, and Society

A cautionary lesson, now grown dismayingly familiar, about well-intended reforms producing unintended bad results. Ever since the ``Big Bang''—the moral cataclysm of Vietnam and Watergate two decades ago—the US has promulgated the most far- reaching ethics-reform measures in its history, affecting government, business, science, and the scholarly community, according to Morgan and Reynolds (a D.C. attorney and a law professor at the Univ. of Tennessee, respectively). Yet, despite the passage of laws such as the 1978 Ethics in Government Act, cynicism about institutions has spread rather than diminished. The authors attribute much of this morass to reformers' mistake in focusing not on actual impropriety but on the appearance of impropriety, an appropriate standard for ensuring judicial impartiality but not for other settings where such neutrality is elusive. The result is ``a story of the substitution of appearances for substance, of technicalities for judgment, of opportunism for self-discipline.'' Among ethics controversies covered here are the scientific fraud charges against Nobel laureate Dr. David Baltimore and a colleague; Stanford University's accounting overcharges related to federal research grants; and Whitewater. Some conclusions are debatable (e.g., in criticizing costs incurred by independent counsels, the authors fail to note that many result from delaying tactics used by executive-branch targets). Many readers will also wish for deeper coverage of such fields as medicine and religion. However, reformers will be troubled by many implications of the regulations discussed here, including the ensnaring of ordinary citizens in the net of the government; apathy; and loopholes that enable politicians to circumvent rules. While too single-minded in its conclusions (haven't these ethics codes done any good?), this analysis offers disturbing reminders that ethicists need to think through the full consequence of their new rules.