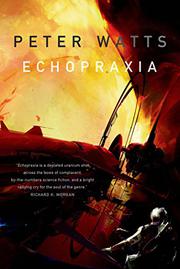 A paranoid tale that would make Philip K. Dick proud, told in a literary style that should seduce readers who don't typically enjoy science fiction.

A companion to Watts' Blindsight (2006), the book opens with a hyperintelligent vampire brought back from extinction by scientists in the 22nd century. She escapes her captors to hunt a reclusive hivelike sect of scientist-monks living in the Oregon desert. Caught up in the conflict is Daniel Brüks, a field biologist in a world that has largely moved beyond the old methods of science, who is on sabbatical in the desert—where he intends to hide from a mass murder committed using his research. In escaping the threats lurking in the desert, Brüks finds himself on a spaceship full of posthumans—along with the vampire. When the ship encounters an alien intelligence, Brüks guides us through the twisting plot to a funny, grim conclusion. Watts' nihilistic meditation on evolution and adaptation is by turns disturbing and gorgeous, with a biologist's understanding of nature's indifference. If at times it's hard to separate what is part of the vampire's or monks' plans and what is simply horrifying catastrophe, that also feels thematically appropriate.

This scientifically literate thriller's tight prose and plot create an existential uneasiness that lingers long after the book's end.