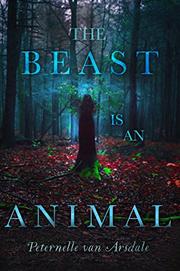 THE BEAST IS AN ANIMAL

In a dark atmospheric fantasy debut, one young woman (like so many adolescents) finds her greatest enemy is the monster within.

After twin sisters tragically warped into wraithlike “soul eaters” wreak vengeance upon the adults who betrayed them, 7-year-old Alys and the rest of the surviving children seek refuge with a neighboring village—at the price of cruel servitude to their oppressive Elders. Over the decade that follows, Alys is secretly drawn to The Beast, the mystical spirit of the “fforest” widely deemed the source of all evil. To her horror, she also realizes a growing sense of kinship with the vampiric sisters, even to a compulsion to drain the souls of anyone threatening her. Van Arsdale limns a bleak, doleful world, inspired by medieval Wales, where the “white as snow,” rigid, and puritanical townsfolk contrast negatively with the more ethnically diverse, gender-fluid, and carefree people of the Lakes. Alys’ archetypical hero’s journey meanders at a dreamlike pace: great swathes of earthy quotidian detail are punctuated by set pieces of grotesque horror and brief interludes of beauty, compassion, and perfunctory-feeling romance. Her final confrontation with the sisters (and her own inner demons) occurs in a phantasmagorical climax that is a pure distillation of all that comes before, at once achingly poetic and frustratingly opaque.

Moody, ponderous, and baroque; a good choice for readers with Gothic inclinations.