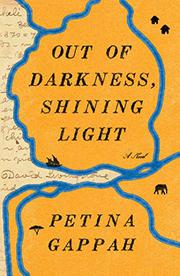 OUT OF DARKNESS, SHINING LIGHT

A rollicking novel that retells the history of British colonial exploration in Africa from the perspective of historical figures who have otherwise been silenced.

Zimbabwean writer Gappah (The Book of Memory, 2016, etc.) tells the story of the black attendants who bore the Scottish explorer David Livingstone's corpse from present-day Zambia to the African coast in the late 19th century. As the prologue says, "This story has been told many times before, but always as the story of the Doctor." Gappah turns the tables by making Livingstone's attendants into protagonists. Our heroes are Halima, a young slave woman Livingstone purchased as a partner for his assistant, the abusive and cruel Amoda; and Jacob Wainwright, a former slave from East Africa who was educated by Christian missionaries in Mumbai. Halima is a jovial and headstrong young woman who speaks boisterously despite her status. "Why any man would leave his own land and his wife and children to tramp in these dreary swamps...is beyond my understanding," she wonders about Livingstone. Jacob is Halima's opposite, a self-serious young man who keeps a journal which he hopes will be published in the future. When Livingstone dies of malaria, his attendants decide to carry his body to the coast in a display of loyalty, so that it may be carried back to England. After burying his heart in the village where he died, the band sets off toward Zanzibar in a show of dedication. The arduous journey through hostile terrain gradually erodes their reverence for the doctor, though. Halima begins to wonder how worthy he is of her dedication. "Was he worth it? What were we doing, taking a father to his children when he had let one of those children die?" Meanwhile, Jacob reads Livingstone's journals and finds a man whose anti-slavery ideals clash with his actions as a colonialist explorer. The journey to the coast turns out to be an education in how the band is oppressed by colonial power. Along the way, though, Gappah captures the diverse cultural milieu of colonial Africa with compelling detail. The result is a rich, vivid, and addictive book filled with memorably drawn characters.

This is a humane, riveting, epic novel that spotlights marginalized historical voices.