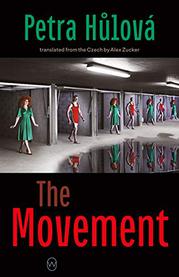 One part Animal Farm, one part The Handmaid’s Tale, one part A Clockwork Orange, and (maybe) one part Frankenstein, Czech writer Hůlová’s novel dismantles the patriarchy and replaces it with a terrifying alternative.

Vera, a true believer in the goals and methods of a dystopic regime, narrates this chilling—yet plausible—account of blind adherence to an ethos stretched beyond reason. Employed as a guard at a reeducation center devoted to teaching men to value women based on qualities other than physical appearance and “charm”—Vera recounts the history of The Movement and her own life. The Movement’s mythologized founder, Rita, is reported to have asked her mother as a child why a female model on a billboard was naked. Her mother’s ominous silence in reply sparked Rita's passion to right generations of unethical treatment of women by any means necessary. The grotesqueries of The Movement’s reeducation practices, some of which may be disturbing to the squeamish, are recited in a matter-of-fact voice with a veneer of self-righteousness. Vera—seemingly humorless and lacking an ability to judge interpersonal relationships in any way other than that prescribed by The Movement—seeks to document the history and successes of the regime despite the evidence of its cruelty, ineffectiveness in some cases, and lack of popular support in others. Vera’s own mother, an early supporter of The Movement, for example, seems to interpret its code of behavior somewhat more loosely than her daughter does, and what is Vera to make of the women who do not subscribe to The Movement’s purported interest in their well-being?

Hůlová’s provocative satire of a feminist future challenges and unsettles in equal parts.