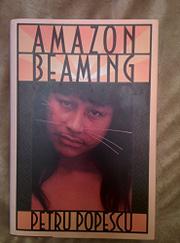 The strange and wonderful tale of National Geographic photographer Loren McIntyre's mystical journal from the depths of the Amazon basin to the river's ultimate source in the Andes, solemnly related by Popescu (The Last Wave; In Hot Blood, 1988 paperback.) With 40 years of Amazon exploration under his belt, as well as subsidiary careers in the US Navy and as a documentary filmmaker, McIntyre jumped at the chance to experience and photograph a ``first contact'' with an elusive Mayoruna tribe rumored to exist on the shores of the Rio Javari, an Amazon tributary. Airdropped onto the river's shore, McIntyre easily joined up with the seminomadic ``cat people''—who tattooed their faces and stuck spines in their cheeks to resemble their claimed jaguar ancestors- -but soon became hopelessly lost following their flight from an unseen enemy. Worried that his hired pilot would never find him, unable to speak the Indians' language, and suffering severe culture shock from jungle life, McIntyre nevertheless became fascinated by the Mayoruna headman, who seemed to communicate with the American through what McIntyre called ``beaming''—or mental telepathy. McIntyre apparently received mental messages regarding the tribe's plan to escape modern encroachers by traveling ``back to the beginning''—fasting, dancing, and ingesting natural hallucinogens to return to the safety of the beginning of time. After witnessing this ceremony, McIntyre returned to civilization, but he would experience a psychic reunion with the tribe—and, perhaps, their ancient ancestors—two years later while combing the Andes for the true source of the Amazon. Three stories—McIntyre's contact with the Mayoruna, his discovery of the Amazon's source, and his own inner, spiritual exploration—make for an occasionally unwieldy bundle of a book, but Popescu's awe, combined with McIntyre's general stupefaction, makes for fascinating reading. A sort of Castaneda exercise in mystical and ecological inquiry, perfectly timed for the New Age. (Sixteen pages of color photographs—not seen.)