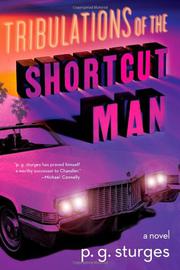 A marital swindle plunges Dick Henry, the man who slices through Gordian knots for a living, into a stew of other schemers, lots of them witless, some of them real sharpies, most of them with just as many boundary issues as him.

Even though the cancellation of his TV show has left her husband, Superior Court Judge Harry Glidden, flat broke, his movie-star helpmeet Ellen Havertine is not without her resources. Spotting the enormous puddle of cash in which aging developer Art Lewis is sitting, she hatches a plot to dope Lewis and marry him off to her sister, nurse Eileen Klasky, so that she can inherit $50 million when the old boy pops off. Unfortunately, Lewis’ latest girlfriend, exotic dancer Pussy Grace, has been so worried about his failure to return her calls that she’s prevailed on Dick Henry, the Shortcut Man, to join her in infiltrating his home in disguise. During their brief but eventful visit, Lewis really does die, and from that moment on it’s a race between Hangin’ Harry and his wife, who want to conceal the corpse until they can mop up any loose ends that might keep Eileen from claiming her inheritance, and Dick and Pussy, who’d just as soon avoid becoming loose ends. Yes, there are other wrinkles as well, from Dick’s continued attachment to Nedra Scott, the old flame who refuses to let any sharklike developers force her out of her rat-infested building, to Rutland Atwater, who takes BO to the level of the hydrogen bomb.

Just as funny as Dick’s debut (Shortcut Man, 2011), but more consistently plotted in the manner of all your favorite criminal zanies.