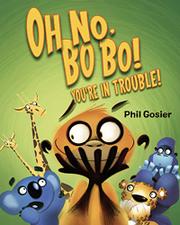 There’s trouble at the zoo!

It begins when Bobo the monkey steals the zookeeper’s flashlight. What a neat toy! “Click. Click!” It goes on and off…until it doesn’t. Fifi the koala is certain that Bobo will be in trouble (as is Bobo). After all, Bobo broke the zookeeper’s flashlight. He can’t fix it (poking it with a screwdriver makes it worse), and no one will help him (not even his fellow simians). Will Fifi tell on him? Not if he trumpets her greatness! (He does.) Will readers tell on him? Bobo asks them. On no! Here comes the zookeeper! The kindly zookeeper, a white man, sees that the flashlight just needs new batteries…and pats Bobo on the head. (Readers attuned to the cultural debate surrounding the association of black people with monkeys may well wince at this sight.) Now it’s Fifi who’s in trouble. (At least according to Bobo.) Told entirely in pictures and dialogue callouts (mostly from Fifi and Bobo), the tale is a stitch. The expressive, exaggerated illustrations, often arrayed several vignettes to a page, might as well be a storyboard for an animated short. Neither characters’ eyebrows seem to be anchored to their faces, often soaring well over their foreheads for extra expressiveness. With the right delivery, this will have listeners rolling on the floor.

Hilarious hijinks at the zoo.