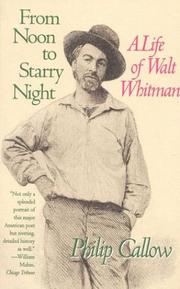 FROM NOON TO STARRY NIGHT: A Life of Walt Whitman

Here, Callow (Son and Lover, 1975) finds Walt Whitman to be mysterious, evasive, contradictory--a ""psychological oddity"" whose very confessions, revelations, and disclosures created a ""thicket of identities"" that further obscured his real self. Callow repeats the familiar story: the deprived boyhood, the ragged but devoted family, the constant moving about to earn a living, from teacher to journalist, mostly in New York; then the sudden bursting into poetry, into song. The author traces Whitman's self-education in the theater, opera, painting, astronomy, geology, and phrenology; his friendships with artists, with Emerson and Thoreau; his knowledge of Dickens and Carlyle--all to be assimilated into his poetry. In Whitman's protean personality, Callow sees myriad contradictions: between his being visionary and practical; between his proletarian tastes and elitist friends; between his love of crowds and of solitude; between his poetry and his journalism; between his affirmation of life and his preoccupation with death; between his obsession with cleanliness and the squalor in which he often lived; between his Quaker background and his celebration of sexuality, which Callow dismisses as a ""weird sexual fluidity."" But, ironically, the major contradiction belongs to Callow himself: Although he sees Whitman as America's ""first genuine voice,"" he explains the poetry by quoting English writers (Blake, Shelley, D.H. Lawrence) whom Whitman didn't read, while quoting only sparingly from the poet's own candid and engaging letters. A simplified and derivative summary of the life and works, no substitute for the inspired biographies by Gay Wilson Allen (The Solitary Singer, 1985) and Justin Kaplan (Walt Whitman, 1980), or for Whitman himself, especially in the brilliantly edited selected letters (1990).