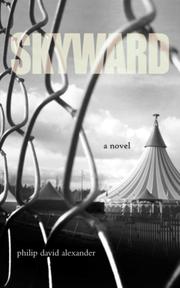 Cops in a small Canadian town try to solve the disappearance of a young man and catch a killer in this complex thriller.

Alexander (Peacefield, 2014, etc.) uses multiple perspectives in this story of a criminal on the loose, set against the backdrop of the vacant Skyward fairgrounds. It begins with a seemingly innocuous car chase; Detective Matt Sharp and his partner are on the trail of a man whom they caught drinking while driving. However, as the perspectives switch throughout the novel, it soon becomes evident that the driver (known only as “Pursued”) is guilty of far worse crimes, including murder. Meanwhile, local troublemaker Stan Hill finds himself the prime suspect when his young brother, Jarrod, goes missing; he’s the third such young boy, in fact, to disappear from the Skyward fairgrounds. Finally, Constable Sheila Warfield, who secretly has the power of psychic premonitions, gets involved when she senses evil and danger in the case of the aforementioned driver. As the suspense escalates and the true identity of Pursued is revealed to readers, the characters must figure out who the killer among them is before he strikes again. Alexander has a sharp eye for detail and a keen sense of place, which bring scenes at the deserted fairgrounds, once home to a “giant, twinkling freak-show with a big top,” to life for readers. Some of the overlapping perspectives make the narrative a little confusing to follow, especially at the beginning; there are enough people who have absent or disappointing fathers that it can be tricky to remember who’s who. But as the story races on, it becomes clearer who the culprit is and the suspense ramps up enough to keep readers hooked. A few of the players, such as Sharp’s wife, Ingrid, could have been fleshed out more, but generally, the narrators are well-developed and compelling—even if the passages narrated by Pursued are a little gruesome in their murderous detail. Overall, this is an unusual but well-crafted and smartly paced thriller.