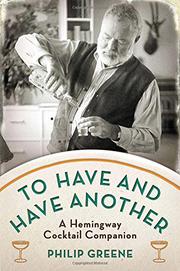 TO HAVE AND HAVE ANOTHER

The co-founder of the Museum of the American Cocktail in New Orleans breathes new life into some of Ernest Hemingway's favorite libations and adds new depth to many of the author’s characters.

Spirits consultant Greene writes that he has “a lifelong appreciation” of Hemingway's works, but he wanted to know more about the epicurean context behind some of the settings and characters. The author features recipes and histories for Hemingway's cocktails, from haze-inducing absinthe to the sour White Lady. He does his best to tell the stories behind the inventors, though he aptly writes, “Heck, show me a timeworn drink with an undisputed lineage and I'll buy you a round.” He follows each recipe with suggested reading: Negronis in chapter six of Across the River and Into the Trees, a Rum Swizzle in chapter 11 of Islands in the Stream. That work also features the “double frozen daiquiri with no sugar,” which “pretty much steals the show in the ‘Cuba’ book of Islands in the Stream.” Popular cocktails, such as the Tom Collins, feature the traditional recipe and Hemingway's variation. Even an obscure cocktail, Physician, Heal Thyself (named by Greene), is included; the recipe was based on a diagram drawn by Hemingway in his medical files. Interspersed between recipes are archival photographs, relevant sidebars and historical facts about Hemingway's friends and bars and the characters based on them, among other intriguing bits.

An interesting read and a must-have for Hemingway lovers and craft bartenders.