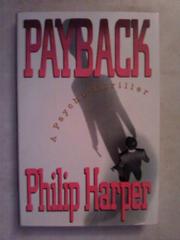 Knockout first novel by ``the combined talents of a Pulitzer Prize-winning journalist and a criminal psychologist''—a psychothriller already optioned for film. George Gray, an ex-reporter, has found a new use for investigative journalism. He locates big-money bad guys in real estate or other endeavors, gets the goods on them, then threatens them with exposure in print and with jail terms unless they make full restitution on their misdeeds—and also give him a juicy cut. (``That's the payback. Blackmail. You end up calling the shots, telling them what to do and making them pay you. They hate it more than any jail.'') Gray thinks that this act makes reporting seem impotent: where the reporter drops his ink bomb and then sits back to watch, Gray follows through and himself runs criminals through the wringer—and he's done this many times. But this time out he's nearly torn to ribbons by attack dogs and by a psychotic second-in- command, Reidus, who enjoys inspired modes of inflicting pain, often letting his victims live to experience their pain to the full. At one point Reidus even breaks Gray's leg like balsa wood. He also appears as unkillable as Frankenstein's monster and rises incredibly from the dead to go on with his horrors. He works for master swindler Carlton, who is emptying a Philadelphia suburb of its blue-collar inhabitants, one by one, and buying up their property on a grand scale, supposedly to build a mall and a spanking new community (he's really just after investors' money). Gray falls in with Sara Mitchell, daughter of Carlton's former partner whom Carlton drove to suicide. Sara herself has become a supertrained killing machine—but is she a match for Reidus? Rich in every way, about detection, newspapering, real estate, with sly echoes of The Maltese Falcon.