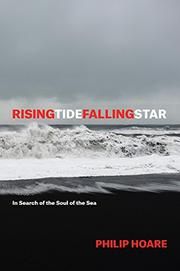 In Search of the Soul of the Sea

A writer immersed in the lore and life of the sea returns with some ruminations about his favorite subject, interweaving the stories of literary and other artists whose lives were inspired by and/or ended in the ocean.

Hoare (The Sea Inside, 2014, etc.) adores the sea, swims in it regularly (weather be damned!), visits significant sites near it, reads about it, and finds mystery and magic in whale songs—for further enlightenment on that subject, read his 2010 book, The Whale. In these chapters, which could be stand-alone essays, as well, Hoare rehearses the stories of a number of literary giants whose lives were sea-soaked in various ways. Among these figures are Percy Bysshe Shelley, Herman Melville (Hawthorne has some cameos, as well), Wilfred Owen, Siegfried Sassoon, Henry David Thoreau, Jack London, Virginia Woolf, and numerous others. Some serve as principal’s in Hoare’s narrative, while others dog paddle on the surface or swim slyly just below. The author does not always get his facts right—e.g., Allegra was not the daughter of Shelley but of Byron; the Hudson River is nowhere near Niagara Falls—but the narrative current is so strong and the language so seductive and even hypnotic (think: waves on a midnight beach) that most readers won’t worry about occasional minor inaccuracies. In the manner of biographer Richard Holmes, Hoare travels to the key locations as his stories progress; he fully understands that standing on the ground and swimming in the water gives his observations stability and gravitas. The beaches where Owen walked, Cape Cod (where Plath and Hughes had stayed), Porthmadog (the seaside community in Wales where Shelley and his first wife, Harriet, lived for a while)—these and other locations Hoare writes about with an intimacy that only a visitor could achieve.

Lush and literate. The author both explains and deepens the enigmas of the sea.