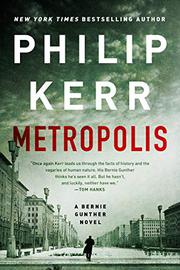 Kerr's final Bernie Gunther novel takes us back to 1928 and the beloved character's beginnings on Berlin's Murder Commission.

Drafted from Vice, Gunther finds himself on the trail of a prostitute killer who scalps his victims and then a serial murderer who is targeting disabled war veterans. Partly in desperation as the number of victims rises and partly to test a new sleuthing concept devised by his superior, Bernhard Weiss, Gunther agrees to go undercover posing as a klutz, or homeless veteran. His nerves are eased by his unexpected romance with a female makeup artist helping him with his street look. But with Nazism on the rise, Berlin is simmering with violence, cruelty, lies, and casual anti-Semitism. "Everyone who was sympathetic to the Nazis believed that a Jew was just a communist with a big nose and a gold watch," says Gunther in his first-person narration, referring to the supposed red ties of the mensch-y Weiss. Still, Gunther is lifted by his devotion to his job, perfect summer days that are "almost worthy of a short poem by Goethe," and bold new cultural directions. He comes into contact with Lotte Lenya (on a break from rehearsing The Threepenny Opera), artist George Grosz (drawing murder victims on public display in the police morgue, "Berlin's showhouse for the dead"), and scriptwriter Thea von Harbou, wife of Metropolis director Fritz Lang. With its lessons for the Trump era, this book is plenty timely. But completed shortly before the author's death, it is also one of Kerr's most congenial, beautifully controlled, and entertaining works. The banter is priceless.

Going against the grain—as usual—by writing an origin novel as his swan song, Kerr leaves his fans happy.