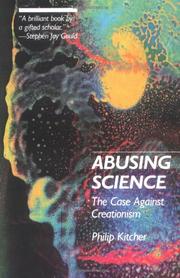 ABUSING SCIENCE: The Case Against Creationism

Though most recent writings on evolution take critical note of creationist arguments, Kitcher's work is the first major attempt at full-scale demolition--and it's an excellent one, both eloquent and exhaustive. The U. of Vermont philosopher of science has examined the principal writings of the proponents of creationism--like Henry Morris, Director of the Institute of Creation Research--and their allies in the Moral Majority; he systematically shows up the flaws in their thinking, the inconsistencies in their arguments, and their misrepresentations of what evolutionists themselves avow. His first chapter is a succinct summary of evolutionary thought to date--including such current controversies as the debate over gradualism vs. puncutated equilibria. In seizing upon such infighting, Kitcher notes, creationists ignore the obvious fact that while scientists differ on the ""tempo and mode"" of evolution, they do not dispute the evidence of evolution itself. Five successive chapters deal with the global and local arguments creationists bring to bear, as well as with the nature of creation ""science."" Some arguments are not unique to creationism. Others, Kitcher points out, have accused evolutionists of ""tautologous"" thinking (what survives survives), and he cites the pitfalls of reducing all of evolutionary thinking to a narrow ""principle"" of natural selection. Later, he tackles creationists' rejection of radiometric dating (the earth can be only a few thousand years old if Genesis is right) and sets forth a number of fanciful creationist propositions about the Ark and the Deluge that are used to explain such matters as the stratigraphic distribution of fossils (the more primitive, the deeper-lying). The last chapter (co-authored with Patricia Kitcher) addresses fundamental issues of science, morality, and religion. At the heart of the creationist argument is the belief that evolutionary thought is the work of the devil, the inspiration of Marx and Freud, the kin of prostitution, promiscuity, militarism, racism, Nazism, and anarchy. The Kitchers reply that a scientific ""is"" does not imply an ""ought""; that both Darwin and Christianity have been perverted by groups with special axes to grind. To allay anti-scientific anxieties, they affirm the positive value of scientific information: ""Arguably it has liberated us from misconceptions, and thereby aided us in our moral progress."" A fine piece of useful work.