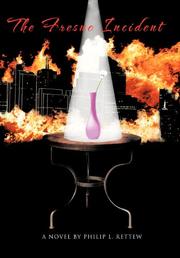 A terrorist attack shakes Fresno, and Jake Lewis is left to mourn the woman of his dreams—or is he?

When Jake meets beautiful singer Sasha, his life changes irrevocably. But then the city of Fresno suffers a mysterious and tragic terrorist attack, dubbed “The Fresno Incident,” and Sasha is nowhere to be found. Jake is left adrift, wondering if his lover was killed in the attack or merely disappeared in its aftermath, and sets out to find the answers. Meanwhile, a fellowship of wealthy, well-connected men, led by reclusive billionaire Duke Chancellor, gets involved in the search and the stakes are raised. The story, told in action-packed bursts as it speeds through different characters and cities, weaves together the search for those responsible for the Fresno Incident with Jake’s search for resolution. The reader will hang on through more than 400 pages waiting for the outcome to unfold. With such an extensive cast of characters and plot, Rettew breaks the action into more than 80 short chapters, which effectively organize the novel’s myriad characters and conflicts. Each chapter begins by marking the date and location of the current action, helping readers keep track of the book’s various subplots that traverse the globe. The structure of the novel itself reflects its sprawling storyline, echoing the effects terrorist incidents can have all over the world. In the midst of all the threads that hold together Rettew’s novel, the author is sure to provide frequent updates on the lives of its two central characters. This serves to keep readers not only intellectually engaged in the clever plotting, but emotionally engaged in its characters as well. A plot-heavy, action-filled read that thrills with international intrigue.