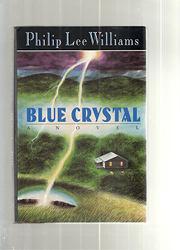 Kentucky legend—in Williams's seventh novel (Final Heat, etc.)- -has it that lodged deep inside the Blue Crystal Cave is the fabulous jewel that gave the cave its name. When a gang of misfits—foolishly convinced that Sam Preston, the cave's owner, is an easy score—ride into his life just ahead of a historic rainstorm, Sam is forced to confront demons of every stripe. Even before the double disaster, Sam is still racked with guilt over a much earlier disaster: the collapse of the cave years ago, an event that killed 17 visiting children and sent Sam's father tailing into suicide. Now, just as he's reaching out cautiously to bookstore- owner Mary Beth Price, murderous simpleton Bobby Drake, who's already done time for murder, arrives on the scene with his ill-assorted auxiliaries: his boyhood friend Hermie Baggett, his prison friend Clay Garc°a, his current girlfriend Misty Ward, and Misty's best friend Christiann Mizelle. At once driven and fractured by Bobby's hair- trigger temper, this ludicrous bunch terrorizes Mary, who succeeds briefly in running off, and Sam, who retreats into the cave, where most of the second half of the novel, a monumentally extended tour de force, takes place. As Bobby spins out of control and begins to turn on his buddies and himself, Williams skillfully maintains the hysteria by showing Bobby accepting his own death but deciding that no witnesses must survive to ridicule him. The inevitable sequel: bats, flashlights, panic in the dark, thousands of gallons of water, and Sam's climactic resolve to assuage his demons by rescuing a final survivor. A subterranean take on Conrad's Victory, best (like its model) on the finely nuanced reactions of its isolated principals to physical and spiritual peril, weakest on the melodramatic denouement that lays the demons to rest.