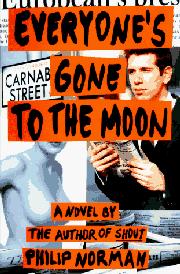 EVERYONE'S GONE TO THE MOON

Novel number six from Beatles biographer Norman (The Skaters' Waltz, 1985; Elton John, 1995, etc.), a scathingly delivered and encyclopedically detailed satire of a young journalist caught up in the whirlwind of Mod London in the swinging '60s. Plucked from the British sticks after unexpectedly winning an essay contest, 22-year-old Louis Brennan is transplanted to the decadent offices of the Dispatch's Sunday color supplement and reunited with his old boss from the North, Jack Shildrick, who has ascended to the editorship of the dowdy daily. Shildrick favors stories on crusty yachtsman plodding around the globe with rescued pigeons and exposÇs that batter the excesses of moneyed society, while the supplement's editor, Toby Godwin (``God'' to his staff), between colossal meals and multiple magnums of Dom, sponsors flashy pieces on cultural trends from Twiggy to the Beatles. Louis gropes for attention, but while God and his minions sniff and chortle at the kid's ideas, Shildrick cleaves to him, calling him ``Poet'' and repeatedly offering him the coveted ``Cicero'' column. Matters get dicey, though, when Louis and Shildrick take up with the same chippie, a talentless but terribly manipulative ingÇnue named Fran Dyson, and dicier still when Louis blows the lid off the married Shildrick's affair. The author's detailed re-creation of the era is impressive, from the vanished fashion temples to the nocturnal hotspots to the theatrical foppishness of mod menswear. But, at bottom, the story is a retread of the corruption-of-the-innocent riff, clueful readers will see the collapse of all careers (and great expectations) a mile off. Still, with cameos from John and George and Mick and Keith and Brian and Marianne, and of course all those zany threads, the novel's awesome length is nicely paced- -thanks, too, to Norman's unsparing humor. Given the recent obsession with all things Mod, this delightful upbraiding of the period should offer an ideal tonic for misplaced nostalgia. It's funny, too.