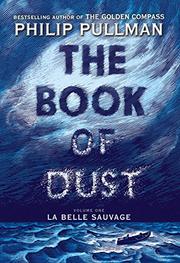 THE BOOK OF DUST

From the Book of Dust series, volume 1

Pullman’s return to the realms of His Dark Materials moves the timeline back to Lyra’s infancy with a tale of young people struggling against outsized forces of both nature and evil.

It’s a story in two parts, as the author devotes nearly the entire first half to a slow buildup of tension around a certain baby recently consigned to the indulgent sisters of a nearby priory, to setting the cast in place, and to the founding of a network of student informants dubbed the “League of St. Alexander” (after an early convert who consigned his pagan parents to the flames—it’s clear the author continues to wield his anything-but-subtle knife on organized Christianity). Then, impelled by a devastating flood and the attentions of a sinister stranger with a horribly wounded, abused hyena for a daemon, 11-year-old Malcolm Pollstead undertakes a desperate rescue. He bundles the laughing infant into his canoe (named La Belle Sauvage) along with teenage acquaintance Alice Parslow. The terrifying hazards they encounter are natural, unnatural, and even supernatural. The rescue becomes a long flight—part idyll, part nightmare—that ultimately leaves the burbling babe and her daemon, Pantalaimon, ensconced in Jordan College. First, though, come encounters with Lyra’s larger-than-life parents and numerous other characters met in other books in the series, no fewer than three of the world’s six alethiometers, the odd fairy or river god, and a sick, twisted villain whose relentless pursuit leads to a rape in the tale’s most hideously violent episode. Save for a few “gyptians,” the human cast is white. Illustrations not seen.

Magisterial storytelling will sweep readers along; the cast is as vividly drawn as ever; and big themes running beneath the surface invite profound responses and reflection.