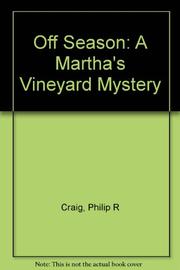 Ex-cop J.W. Jackson's idyllic engagement to Martha's Vineyard nurse Zee Madieras, and his ritual bouts of fishing and scalloping and cooking and eating, are interrupted by a feud between animal- rights activist Mimi Bettencourt and hunter/editorialist Ignacio Cortez over the proper use of the 50-acre tract that wealthy Carl Norton has just sold to a public commission; by a couple of run-ins with uncouth Providence hoodlum Joey Percell, who warns Nash Cortez to lay off them animal-rights people; and by a slight case of murder. The corpse is Chug Lovell, Carl's no-account neighbor and rumored tobacco heir. As usual, J.W. (Cliff Hanger, 1993, etc.), hired by improbably swinging lawyer Heather Mainwaring to find out who killed the man she was swinging with, never falters in his stream of breezy banter and prosy homiletics, not even when he's questioning the other women Chug had also enticed into sexual submission and then blackmailed with his photo albums. A pinch of mild mystery—J.W. seems to have learned his craft not from the Boston PD but from a mail-order course, and the local law is two or three lessons behind him—to a double helping of recipes and cozy charm. It must be off season for crime and punishment too.