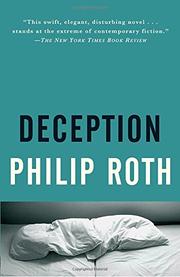 A novel of voices—men's and women's, but mostly the voices of a couple having an illicit affair, he a married writer, she another man's wife. If at first Roth here sounds like Pinter, that's not accidental, for the book as well is about the English and discretion and artistic self-revelation. The snippets of talk are rather foamy, the blackouts somewhat too pat. The voices of others—speaking to Roth himself, not to fictional alter egos Zuckerman and Tarnopol—include East European women (and in one case, an aggrieved husband) and a biographer of Zuckerman who's already dealt with Zuckerman's own subject, Lonoff. All that's here, done in thin lines, is the scaffolding of Roth's previous house of fiction—and the dramatic crest of the book comes when we're finally let inside to see a commotion in the kitchen, the tablecloth being pulled out from under the dishes, so to speak: when a voice that is Roth's wife's accuses him of really having the affairs he orchestrates here, and when the writer must once again defend-himself-by-not-defending-himself: "I have been imagining myself, outside of my novel, having a love affair with a character inside my novel. . .look, I follow my leads where they take me—ah, the hell with it. What do you propose, that I police myself? That I don't follow through on this sort of impulse for fear—for fear of what? Enlightened prurient opinion? Well, not by you and not by anyone will I be censored like that!" With the added, more profound note: "I portray myself as implicated because it is not enough just to be present." More expository "presence" might have supercharged this (as it did in The Counterlife) origami-model Roth novel a little, though: you do have the feeling of being set up, of it being all indictment and no trial.