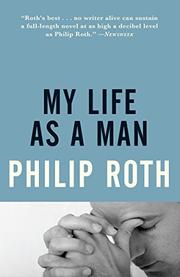 MY LIFE AS A MAN

The opener here — one of two stories which goes by the name of "Useful Fictions" — is by Peter Tarnopol and about Nathan Zuckerman who is of course Peter Tarnopol who is of course Philip Roth recording his life as a man already only too recognizable as that of the mensch manque — the Jewish boy from New Jersey who was such a public nuisance in the public library and such a misfit in the Army and who became "the golden boy of American literature" (1959 — hello, goodbye) and then went on to teach in a midwestern college where he became hopelessly entrammeled with two women. I.e. — the basis of what will be shamefully appropriated as useful non-fiction (a case study) by Dr. Spielvogel who also reappears and considers him "among the top young narcissists in the arts." Thus a series of reprises finds Peter Tarnopol dividing his time almost equally between his analysis and his writing and Maureen who trapped him into marriage (that urine specimen she took off a black woman in Tompkins Park) — Maureen who beleaguers him and berates him ("Find'em-fuck'em and forget'em Flaubert") through the years in which she refuses him a divorce although there's Susan, popping pills "like M & M's" but cooking him marvelous gourmet meals and waiting — waiting — waiting like another one of those ballbreaking Clytemnestras. . . This then, baldly and barely basted together, is Roth's very own kind of Jewish intellectual slapshtick, worked and reworked from earlier sources and all going back to that primal motherlode of neurosis which has led him through other areas of "erotic anthropology" to further difficulties entailing either making it or letting go. However familiar or strenuous, there is that bravura and this is the funniest book he's written since Portnoy. So Nu, "Let's begin.