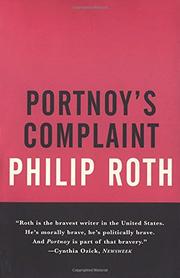 There are two voices in Portnoy's Complaint, Philip Roth's quasi-autobiographical tour de force, though both voices are the voices of the hero. The truer one is best represented by the remarkable section called "Jewish Blues." Here the theme is adolescent rage, middle class New Jersey misery, and filial ambivalence ("a Jewish man with parents alive is a 15-year-old boy, and will remain a 15-year-old boy till they die!"). The tone is at once nostalgic and embittered, rollicking and sad, and the juxtaposition of domestic conventions with the wild masturbatory fantasies of young Alex Portnoy, achingly accurate in every respect, including the highly colored one of the "castrating" Jewish mama, often equals the pathetic brilliance of some of the short stories of Gogol and Babel, besides being, in its rather idiosyncratic way, a closer look at the "generation gap" than anything that has yet appeared in print. The other voice, while rarely losing its original verve, (this is, without doubt, the most "inspired" of Roth's performances), is much less authentic or agreeable: thirty-three-year-old Alex, hot shot lawyer in the Lindsay administration, self-deprecating slob and non-stop lecher, seems not so much a Roth creation as another of those porno-kvetching heroes familiar to readers of Bruce Jay Friedman, replete with bargain-sale displays of fellatio and cunnilingus, as well as an uncomfortable succession of shikses headed by "the Monkey," a votary of East Side Kama Sutra. The affair with Mary Jane, which occupies more than half of the book, is hysterical yet mechanical, private yet desperately unaware, appropriately exhausted on a note of "poetic justice"—Alex becomes impotent, and in Israel. Masterful in parts, phony in others, but obviously a "hot" best-seller.