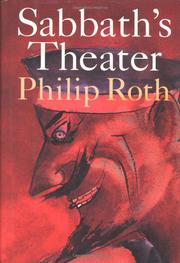 If Chaucer's Wife of Bath had been a male Jewish sexagenarian, she might have sounded a lot like Morris "Mickey" Sabbath. He's the lustful egomaniac whose breakneck chutzpah powers Roth's brilliant new novel—his funniest since the palmy days, so to speak, of Portnoy's Complaint. Sabbath was once a notorious puppeteer, whose "Indecent Theater" performances evinced "an unseemly, brilliantly disgusting talent." Now aged 64, on the outs with the wife who bores him (and supports him), Mickey vacillates between clinging to life and preparing for death. He recalls those who needed him or fed his various hungers, including his first wife, Nikki, a beautiful cipher who simply walked out of his life one day and never reappeared; his dead mother, who endured the majority of her years mourning the death in wartime combat of Mickey's older brother Morty; and his dead mistress Drenka, a sexual athlete whose exploits moved him to cheers—all the people he has loved, hated, exploited, abused, and lost. Effectively exiled from his upstate New York home, Sabbath wanders to Manhattan for one old friend's funeral, moves in with another (whose wife and daughter he schemes to seduce), survives the mean city streets' dangers (in a rude and hilarious parody of Saul Bellow's Mr. Sammler's Planet), and repeatedly performs an act of typically Rothian homage at Drenka's gravesite. There's a delirious, exhilarating grandeur in the mad old man's defiant refusal to mourn or regret, his visceral determination to squeeze every drop of pleasure out of every experience still within his reach. Death may beckon, but, as Mickey Sabbath keeps blissfully rediscovering, "Something always [comes] along to make you keep living, goddamnit." No writer since Henry Miller has depicted sex as the driving force of life with such a scintillating combination of wit and heat. Roth here creates one of contemporary fiction's great characters—and manages the Herculean feat of containing him in a savage, spectacular novel that may well be his best.