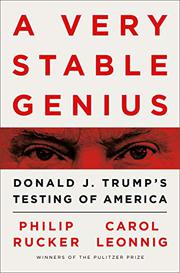 Disparaging accounts of presidents remain a publishing staple, and many close to Bill Clinton, George W. Bush, and Barack Obama were happy to reveal unflattering details. However, “unflattering” does not describe this portrait of Trump; “horrific” would be a better fit. Sadly, it’s entirely familiar. Marching through these pages is the same loose cannon who delighted audiences on The Apprentice. Trump made the rules, and those who didn’t measure up were berated, humiliated, and dismissed; no one questioned his authority. As president, the authors amply demonstrate, he still feels his word is law. When officials explain that an order—e.g., to “shut down” the border to keep out immigrants —would force them to break the law, his response was that he would pardon them. He admires dictators such as Vladimir Putin and Kim Jong Un and expresses contempt for democratically elected European leaders. Trump knows little history or geography and has no interest in learning. Aides quickly recognized that listening to others at conferences bored him, and he refused to read briefing materials. Flash cards got his attention. He hated to be contradicted and publicly reviled those who irritated him, from personal assistants to elderly statesmen and generals, and he fired advisers with abandon. Eventually, they adapted. “Trump began the year 2019 as a president unchained,” write the authors in a highly depressing, meticulously documented chronicle. “He had replaced a raft of seasoned advisors with a cast of enablers who…saw their mission as telling the president yes.” Readers as dismayed as the authors should read one or two anti-Trump diatribes—as one of the best, this one will do nicely—and then swear off the genre and get to work.

A significant, deeply reported portrait of the madness that continues to grip the White House.