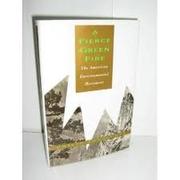 A wide-ranging and detailed survey of the U.S. environmental tradition from ancient Americans to Al Gore, with cogitations on the squandering, sullying, and disfiguring of our land; by former veteran New York Times correspondent Shabecoff.

Ever since Americans decided to subdue nature rather than to work with it, Shabecoff observes, we have also shown an interest in protecting the environment, if only vaguely. This ambivalence has informed our way of looking at the land—as beautiful country, indeed, but also as capable of yielding a profit. The personalities and events that shaped the American environmental ethos, good and bad, are what interest Shabecoff: From Columbus to Edward Abbey by way of Jefferson, Thoreau, Muir, Commoner, Times Beach, Love Canal, Three Mile Island, Earth Day, and many more, their influence and importance appraised with the discernment only an old hand commands. Shabecoff is particularly taken with the grass-roots movements that hoisted the banner after the Reagan/Bush presidencies abdicated (he says) governmental responsibility toward the environment, and he turns a leery eye on the revamped professional environmental organizations that are inclined to cooperate with existing political and economic forces. As a reporter and historian, Shabecoff comes across smartly, his style breezy and graceful, his reach sweeping; but as a philosopher, he is less successful. He admits to being anthropocentric, but his defense for such a viewpoint in one so sensitive to the land just doesn't float. And some of his conclusions are more wishful than real—e.g., "The environmental impulse became deeply enmeshed in the nation's institutions, laws, and daily life.'' New eco-volumes have been thick on the ground since the Rio summit.

Out of this clutch will emerge a memorable few, and Shabecoff's offering, despite its flaws, has the breadth and acuity to be among them.