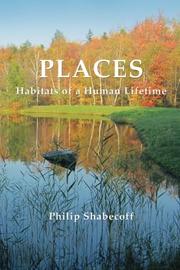 Habitats of a Human Lifetime

Environmental writer Shabecoff’s (A Fierce Green Fire, 2003, etc.) memoir is informed by his passionate, decades-old interest in the natural (and sometimes urban) environment—what it means to us and how humans have worked assiduously to destroy it.

Each essay describes and comments upon one of the many places where Shabecoff has resided or at least visited in a long career as a writer for the New York Times. These chapters include the summer place he and his wife built in the Berkshires (“The Best Place”), the Bronx neighborhoods where he grew up, the Catskills where, every summer, young Shabecoff and his family escaped the sweltering city, and his sojourns as a journalist in Germany, Japan, Washington, D.C., and many other locales. Toward the end of his career at the Times, he became interested in ecology and continued that interest into his pseudo-retirement. Now nearing 80, he finds it’s time to look back, sometimes fondly, sometimes angrily. Shabecoff is neither a fanatic nor a purist: “I like my wilderness not too wild,” and “I believe in the sanctity of life, but I make exceptions for biting insects.” Over the years, “civilization” encroached on his Berkshire retreat, but he accepts that inevitability with good grace. He is, however, often nostalgic for the environments of his childhood. He now sees the Bronx as a dysfunctional slum, although in his childhood, it had lively ethnic neighborhoods, good schools and clean streets. Set mostly in Washington, D.C., “Every Place” tells the story of the author cutting his teeth as an environmental writer, and he describes the often bitter journalistic wrangling, beginning with the Reagan administration. There’s no love lost between him and conservative administrations whose goal was to privatize everything and give powerful industries free rein. In fact, Shabecoff—who’s rubbed elbows with numerous movers and shakers over the years—never pulls his punches, calling out those he sees on the side of the angels and those not. Readers will also enjoy 10 pages of black-and-white family photos, including Philip and Alice at their beloved Berkshire getaway, which gives the book an extra human touch. As expected from a man who’s dealt with words his whole adult life, the writing is consistently graceful, with rarely a false step. “The Last Place,” for instance, begins on an elegiac note related to mortality, then slowly builds into as bracing a jeremiad against greed and stupidity as readers are likely to find anywhere.

A must-read for anyone interested in the environment—shouldn’t that mean everyone?