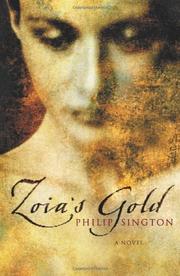 The story of Zoia Korvin-Krukovsky—aka Madame Zoia—provides tremendous fodder for a novel: Born in Russia in 1903 to an aristocratic family, she was imprisoned by the Bolsheviks during the revolution, later became an artist who studied under the likes of Vassily Kandinsky, and hung out with the Left Bank crowd in Paris. She married twice, broke hearts often and eventually settled in Sweden, where she specialized in painting on gold leaf; she hewed to that technique until she died in 1999, creating images that are both seductive and, as Sington would have it, springboards for international intrigue. Using Madame Zoia’s correspondence as a narrative skeleton, the author builds his story around Marcus Elliott, a disgraced art dealer who gets a second chance in the trade, thanks to an offer to write a study of Zoia’s work for the program of an upcoming auction. Imagining Zoia’s life in flashbacks, Sington sympathetically evokes the turning points in her life, especially her years in Paris and North Africa in the late ’20s, when she balanced her artistic ambitions, an increasingly disapproving husband and an affair with a young fellow artist. Zoia emerges as a vibrant yet emotionally burdened soul, but the other characters lack such layers; a subplot involving Elliott’s wife and child exists mainly to ratchet up the tension of the plot, which involves a false will, manipulation of facts and general dastardliness on the part of the greater art world. An intrepid, young, attractive female reporter who’s privy to the truth about Madame Zoia arrives on the scene, and soon enough, the artful finery vaporizes, leaving behind a smart, fast-paced, but ultimately clichéd tale whose familiarity weakens its climactic revelations.

An engaging portrait of an artist swaddled in overused cloth.