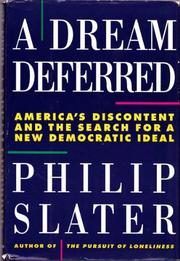 America's Discontent and the Search For a New Democratic Ideal

An insightful, timely examination of the fragility of America's commitment to democracy, by cultural analyst Slater (How I Saved the World, 1985, etc.). In many ways an expansion of his classic The Pursuit of Loneliness (1970), this is powerful and provocative on its own terms. Starting with the optimistic assertion that authoritarianism is finally relinquishing its five-thousand-year choke-hold on social structures worldwide, Slater argues that the democratic spirit gaining ground elsewhere is still vigorously resisted here at home. Through systematic oppression, the encouragement of public apathy and submissiveness, the deflection of public resentment, and especially the withholding of critical information, America's founding ideals have been subverted, with the erosion clearly accelerated in the last decade, to the point where militarism and macho sensibilities have taken over in shaping the American presence in the world. Democracy is the wave of the future for Slater, however, so to him the prevailing ``might makes right'' sensibility in post-WW II US foreign policy, a perfect expression of the authoritarian agenda, can be viewed as a read-guard action sure to fail when the American people awaken (or are awakened) to their civic responsibilities. Heavily indebted to the pioneering work of Mary Parker Follett in defining modern democracy, an impressive array of historical, sociological, and statistical arguments are deployed to convey the serious nature of the dilemma our culture faces, but course- corrections are provided so that the prognosis is distinctly upbeat. Persuasive, comprehensive, and precious at this historical moment.