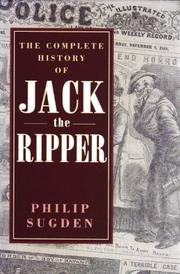 THE COMPLETE HISTORY OF JACK THE RIPPER

This exacting book adds a cogent historical investigation to the relatively few intelligent books about the father of all serial killers. Sensationalistic distortion and overimaginative theorizing have been part of this anonymous criminal's history since the first contemporaneous tabloid stories on the Whitechapel murders and continue in the inquiries of modern ``Ripperologists.'' For example, the letter signed ``Yours truly, Jack the Ripper'' that christened the legend was probably a journalist's headline-grabbing forgery, perpetuated in more hoax letters from the Ripper-crazed public. British historian Sugden corrects such myths and errors with donnish competitiveness, spending only a little time dispatching the more bizarre hypotheses (such as the recent Ripper diary hoax, the fanciful implication of the royal family in the murders, and the innumerable post-Victorian pseudo-suspects). Avoiding the penny-dreadful archives of Ripperology, he diligently approaches the voluminous police work and forensic evidence on the ``canonical'' four victims, all prostitutes, and an equal number of possible ones. Drawing on previous research and his own, he reexamines the eyewitnesses' testimony, inquest reports, newspaper accounts, and police leads (and red herrings). Although the material is still compelling and timely after a century, Sugden's sometimes sluggish prose and narrative do not bring to life the panicked atmosphere of the East End or the tensions within the police department. In the end, though many inconsistencies are swept away and many ambiguities left warily intact, Sugden produces an approximate modus operandi around which a convincing psychological profile can be constructed. His examination of suspects exonerates previous favorites, such as Michael Ostrog, whom Assistant Chief Constable Melville Macnaghten called a ``mad Russian doctor''; but with even his preferred suspect, a Polish con man and poisoner, he reaches the verdict ``not proven.'' Sugden's factual treatment of the murders provides a meticulous and reasoned profile for readers and future detectives. (Photos and maps, not seen)