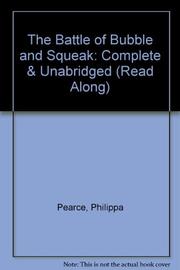 THE BATTLE OF BUBBLE & SQUEAK

That perennial source of child-misery—an uptight mother who's not sympathetic to pets, especially the ratty sort—is deftly and unblinkingly examined by Philippa Pearce, though the situation is too familiar, and the outcome too predictable, to yield one of her more memorable fictions. The two gerbils, Bubble and Squeak (after the English beef-and-cabbage dish), are really Sid's—bestowed upon him by an Australia-bound acquaintance—but it's doting Peggy who can tell them apart, and little Amy who squeals. As for unassertive stepfather Bill, well, he once had white mice as a boy. . . . So there's a rush of resentment when Mrs. S., unbeknownst, gives the gerbils away (Sid runs off to the town's glummest woods) and despair when—after their return and the ensuing "gerbil festival"-she puts out their cage for the garbage man. But: "Missus," he says devastatingly, "you can't do this. There's something alive in here." To comfort the horrified Amy, Mrs. S. promises not to send the gerbils away again. And Sid, who's been equally intransigent, reluctantly agrees to let them stay with Peggy's accommodating friend for a cooling-off period. The final pair of crises thus finds the family more or less united: Bubble is mauled by a cat, Mrs. S. helps administer medication, and on the former owner's reappearance (Australia "didn't suit"), everyone talks him over to acquiring replacements. An active story, intensely felt, discerningly put, and irresistibly pictured.