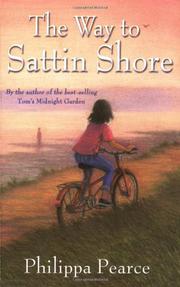 THE WAY TO SATTIN SHORE

Here is Kate Tranter coming home from school in the January dusk—the first to come, because she is the youngest of her family." With that plain, brisk, insinuating opening—the introduction, also, to the occupied house "with no lit window"—there begins a child's searing initiation into adult secrets, cruelty, shame: Philippa Pearce's most ambitious book since the unforgettable Tom's Midnight Garden. Kate, an inward child (about ten) attached to her cat Syrup, believes her father to have drowned the night she was born and to be buried in the churchyard. Then the headstone disappears, and Kate learns that unknown "Uncle Bob" was the Alfred on the headstone—and her own father, Frederick, has just recently died: the message in dour Granny Randall's mysterious letter. From oldest brother Ran—once fond, now secretive too—she has heard of "something awful" that happened, about the time Dad supposedly died, on also-unknown "Sattin Shore." A bicycle trip there—a spot on the estuary, next-older brother Lenny knows—is exhausting, unnerving. (What about the cryptic old woman, looking at Kate so curiously, mumbling about drowning? What was the man with the binoculars doing?) At home, mystery crowds upon mystery, distress upon distress. "The eyes of a stranger"—with a face like Ran's—"looked at her from over her shoulder, from the dim depths of the mirror." Syrup disappears, then reappears in the loft under the roof. (Could feeble Granny Randall really have gone up there? Why?) The resolution will not only Explain All, it will (as you'll have guessed) restore Kate's Dad to the family, much chastened (he disappeared after circumstantial implication in Bob's drowning), and leave Kate, who has been fierce beyond pluck or spunk, content to look forward—"to her birthday in July, and the great good changes that were promised." The mystery is a cover, of sorts, for emotional and psychological baring that would otherwise be too much.