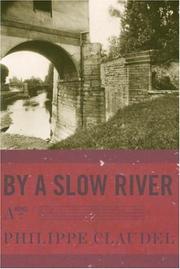 BY A SLOW RIVER

Untimely death and existential angst in a small French village.

The narrator is a retired policeman. The main characters include a prosecutor and a judge. And there’s a dead girl, her small body marred by signs of strangulation. At this point, though, all similarities between this novel—the winner of last year’s Prix Renaudot—and the typical murder mystery cease. First, there is the matter of pacing. The title refers to the listless waterway that winds alongside the town of V, in the French countryside, but it also seems to describe this meandering narrative. The central story concerns the unnamed policeman’s long obsession with the case of a murdered girl, but the digressions are many and prolonged. The narrator pauses to recount the fate of the town whore, for example, and to offer a secondhand account of a dinner at the prosecutor’s house. He is also something of a philosopher. While some of his dictums are eloquent—“Brutally, death spirits beautiful things away yet keeps them intact”—others are less so: “Madness is a land that’s not open to day-trippers; it has to be booked in advance.” This novel also lacks the moral certainty of most detective fiction. Set during the Great War, the story highlights the absurdity of prosecuting a single murder when whole battalions of boys are killing each other just a few miles away. There are few true innocents here, and no heroes. Justice, if it happens at all, happens by accident. The mystery that propels this story is not the question of who strangled a little girl, but the deeper, universal mystery of human existence. Claudel’s policeman is not driven by matters of crime and punishment, but by a kind of dogged despair resulting from his belief that life is meaningless and ugly, and that each of us is—ultimately and essentially—alone.