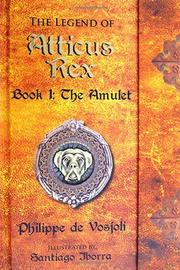 THE LEGEND OF ATTICUS REX

Young Gabriel has his bow and arrow ready: He is proud to go with his father, Marcus, into the Crimson Forest, on the lookout for evil forces that have been terrorizing travelers. And he soon gets the action he is looking for: Terrifying Volgoths appear—stand-ins for the Visigoths who invaded the Roman Empire in the late 4th century. The Volgoths are deliciously frightening, with beating bat wings on their helmets, giant red-eyed weasels at their command, and skulls and femurs clutched in their powerful hands. This will satisfy many young readers’ thirst for real action, for monsters and villains that are truly scary, and for dangerous, life-and-death situations. De Vosjoli (Popular Amphibians (Advanced Vivarium Systems), 2012, etc.) delivers all that and more—but leaves out the blood and gore: When a villain dies on the battlefield, he’s dragged underground, and when a spear dispatches a giant weasel, it melts into a black ooze. In the heat of the battle, an enormous dog appears—the eponymous Atticus Rex—to save the outnumbered Romans. While action—arrows zing and swords swing on nearly every page—takes precedence over character development, young Gabriel is very much like the 7-, 8-, and 9-year-olds the book is aimed at. He wants to fight alongside his father, but he also sleeps with the candle lit or while clutching the protective amulet of Atticus Rex his father unearths. Two minor quibbles: While Marcus and Titus are very believable names for Roman citizens in the 4th century, Gabriel, Miriam and Charlie are not. And, when Marcus is called to “the front” (mostly out of narrative necessity), young readers are unlikely to understand that phrase without any context. Otherwise, the story is intelligently written and explains just as much as its target audience might need.

This fast-paced chapter book has the action that many new readers crave and rarely find on the bookshelves for their age group.