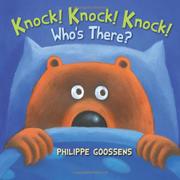 In this guess-who’s-knocking title, the clues are either too vague or too easy, the story is slight, and the illustrations are a tad pedestrian.

Set in a wintry clime at night, some things knock four separate times on Bear’s door. They each beckon to him. The first calls, “Boo!” A turn of the page reveals what Bear guesses is outside. On those pages, the illustration does not entirely fill the page but has the rounded border of a thought balloon. A ghost, an ogre, the “big bad wolf” and a “wicked witch” each demand to be let in. Readers witness poor Bear becoming increasingly frightened as the mysterious voices persist. Is his imagination getting the best of him, or is he right to be so cautious? The last rapping on the door, however, results in Bear declaring, “Go away! I do not open the door to strangers.” To his relief it is not a stranger but his tiny friend, Archibald. Bear is so happy to see his pal, he wipes the sweat off his brow and smiles. But then Archibald announces a surprise for Bear. He has brought the exact same scary creatures Bear was worrying about to dinner. Though Goossens attempts to create an interactive guessing game for readers and perhaps deliver a message of caution to not trust strangers, it fails to coalesce into an engaging read.