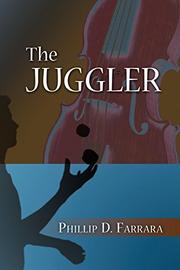 In Farrara’s (The Royal Flush, 2012) latest fictional work, a former circus performer comes to terms with the successes and wasted opportunities of his youth when a reporter promises to thrust him back into the spotlight.

Clyde Herring is no longer the world-famous juggler he once was. His career with the Barrington Brothers Circus spanned from 1945 to 1989, and he was once a talented violinist and war hero, but now he lives alone in a shabby apartment in Reading, Pennsylvania. He never saved any money, nor did he ever marry or have children, although he did love someone once—Julie Pullman, now one of the richest and most successful women in the world. But the two haven’t seen each other in years, and the elderly Clyde has little else in his life, other than his daily routine and vodka. When it’s announced that the Barrington Brothers Circus is coming back to town, local sportswriter John Ryan gets the assignment to write a feature on Clyde. John’s goals are to increase publicity for both the circus and the newspaper, and to explore what Clyde has been doing with his life since 1965, when the paper published its first article about the juggler. Clyde later experienced a disastrous, drunken fall that ended his career and sent him into a downward spiral. The author deftly weaves together the threads of Clyde’s life, introducing bits of his past and present to reveal the consequences of the decisions he’s made over the years. The juggler isn’t the abject alcoholic that readers might expect, however. Instead, Farrara shows how Clyde brings a spark of cheerful humor to all of his interactions, balancing his melancholy with a refreshing self-awareness that will keep readers eager to see how his story turns out. Although the plot is a simple one, and often veers into predictability, it doesn’t make the juggler’s life story any less engaging.

A short but sweet tale that arrives in a foreseeable place, but provides an enjoyable journey on the way there.