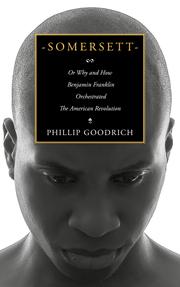 Or Why and How Benjamin Franklin Orchestrated the American Revolution

A history book examines the life of Benjamin Franklin with an emphasis on an anti-slavery case.

A practicing surgeon, Goodrich is passionate about history. But despite being an avid reader of history books, it was not until later in life that the author stumbled on the existence of the British anti-slavery case Somersett v. Steuart. Like most American schoolchildren, Goodrich had long been intimately familiar with the role of Boston in the origins of the Revolutionary War. While stories of “taxation without representation,” tea parties, and the Boston Massacre were well known, they did little to explain why so many Southern slave owners—George Washington, Thomas Jefferson, James Madison, and James Monroe, for example—emerged alongside Bostonians as patriots. To the author, the 1772 Somersettcase became central to his understanding of the complexities of the American Revolution, as it exposed Southern fears of British abolitionism as well as inspiring a new wave of anti-slavery sentiments among patriots predisposed to the revolutionary “freedom” rhetoric. The book’s focus on Franklin, a onetime slave owner whose last public writing condemned slavery as antithetical to American values, is fitting. In concise, crisp chapters, the volume provides both an overview of Franklin’s life and his relationship to a larger network of Colonial and early republic figures. It is particularly adept at weaving Franklin’s personal story within the grand scheme of 18th-century international politics. The work’s strong point is a 50-page interlude halfway through that provides a comprehensive history of the Somersett case. (In a landmark ruling, an English court held that slaves were not chattel.) Though academic historians will note that the book does not add a new interpretive framework to understanding the Revolution or Franklin, Goodrich offers general readers an engrossing, well-written narrative history full of rich details. The volume’s use of dialogue as a means to advance the story may be ahistorical, but it is nevertheless fair to the memoirs and primary source documents the author relied on to build his narrative. The work also contains a remarkably thorough, annotated bibliography that delivers valuable commentary on primary and secondary sources related to Franklin, the Revolution, and the anti-slavery movement.

An engaging account that explores Franklin and the Somersettcase.