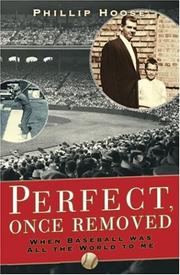 When Baseball Was All the World to Me

YA author Hoose (The Race to Save the Lord God Bird, 2004, etc.) recalls his youthful obsession with baseball and the profound impact of his casual friendship with a famous cousin who played for the Yankees.

Growing up in 1950s Indianapolis, the author loved nothing more than baseball. With the help of indulgent parents who subscribed to nearly every magazine about the sport, he quickly became the neighborhood expert, even fielding phone calls from his barber to settle arguments. Despite his voluminous knowledge, Hoose was dismayed by his lack of prowess on the field, where he was often the last one chosen. Just as he seemingly reached his pre-adolescent nadir, his father mentioned that he was related to none other than Don Larsen, a pitcher for the New York Yankees. The boy wrote to his second cousin about his struggles and received an encouraging note in return, setting in motion a long-distance relationship that would have a significant effect on Hoose’s life (though Larsen would only vaguely remember the details years later). Once word spread about his famous relation, he quickly became something of a local celebrity, especially after Larsen pitched the only perfect game in World Series history, in 1956. Though it took place during school hours, Hoose managed to see a few innings thanks to a comically frantic arrangement with his mother, who rode his bike to school at lunchtime so that he could pedal it back home, eat while watching the game, then race back to school just in time for class. These idyllic remembrances perpetuate the pervading cliché that sport was a better, purer pursuit in the past. Hoose’s genuine passion for the game shines through, however, and the self-effacing descriptions of his boyhood troubles make you want to root, root, root for the kid with the big glasses and the wild arm.

Removed from perfect indeed, but all the more charming for it.