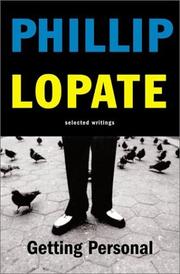 In a motley collection of previously published pieces, novelist and essayist Lopate examines with unique intelligence and an unforgiving eye everything from the smell of his navel to a film by Godard.

The volume begins playfully with “Notes Toward an Introduction,” which the author never completed due to an untimely death (fear not: he lives). Fortunately, Lopate (Totally, Tenderly, Tragically, 1998, etc.) quickly abandons this unnecessary inanity and proceeds to offer evidence why he is one of America’s most admired essayists. The 29 pieces form a sort of rough memoir, beginning with a reminiscence of his early years of school (his first grade teacher had a glass eye) and concluding with a wrenching description of the death of his father in 1995, followed by a brief mediation on love serving as a sort of encore. Some of these essays are—or soon will be—classics of the genre. “Samson and Delilah and the Kids,” which considers the impact on his own life of both the biblical and Cecil B. DeMille versions of this classic battle of the sexes, is a brilliant instance of how research and scholarship can illuminate the most intimate of concerns. A piece about his infatuation with a Korean woman appears in some ways to be a transcript of everyman’s imagination. Lopate can wax silly (he writes about shaving a beard and buying a cat and shushing noisy people in movie theaters), somber (he tells about the deaths of colleagues, one by suicide, another by cancer), bemused (he wonders why a relationship with a woman named Claire never seemed to ignite), and (fortunately not often) a tad self-righteous. One of his longest, most tedious narratives tells about a production of Uncle Vanya he once mounted with elementary-school children: it turned out wonderfully, and everyone learned ever so much. Thank goodness this is not typical.

Displays in abundance the author’s astonishing ability to listen to—and record in prose that approaches perfect—the music of his own thoughts as he sometimes stumbles, sometimes glides through life.