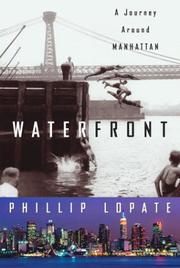 A Journey Around Manhattan

Though he writes like cream pouring from a jug, essayist Lopate’s (Getting Personal, p. 1210, etc.) thoughts act on the reader like a vigorous head massage: this will not be a “lighthearted book about wandering the watery perimeter of Manhattan,” but one written out of “a more reserved, critical perspective of a lifetime’s accumulated uncertainties.” Yet as this native New Yorker ponders the role of waterfront development, following the decline of its maritime and industrial functions, he is richly entertaining. Now that waterway use is not such an urgent need, Lopate argues, it’s important to consider a host of variables other than those associated purely with making a buck. So he considers the shoreline in all its glory: geologic, cultural, imagined. Lopate notes the role of schist, marble, and gneiss, animal skins and oysters, the tension between public space and private enclaves “as hidden from public view as the Imperial Palace in Peking,” the visual joy of the Starrett-Lehigh Building’s “flapjack stack of fenestration,” and the grudging, un-neighborly, suburban Chelsea Piers. Walking allows him to “sample other class realities: sipping the life above one’s station as well as below it,” to measure the good and bad of Robert Moses, and to take an honest appraisal of the risky terrain underpinning public housing projects. His sensible proposals about how to improve public use of the waterfront range from the specific suggestion that High Bridge be opened to pedestrians to the general declaration that the shoreline “must regain a sense of purpose, and not just become a theatrical backdrop.”

Is the evolving waterfront the key to New York City’s destiny? Lopate thinks so, and he could convince readers with his intimate and urbane tour. (35 b&w photos, 2 maps)