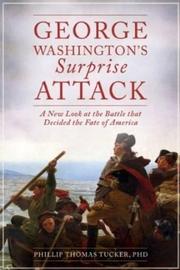 A historian offers a blow-by-blow re-creation of George Washington’s 1776 Christmas crossing of the Delaware and the capture of Trenton.

Washington’s shocking victory over the Hessian garrison occupying Trenton gave teeth to the Declaration of Independence, greatly enhanced his own and his discouraged army’s reputations, sobered public opinion in Britain and fueled hope that France might intervene to aid the struggling young nation. As he charts the icy river crossing, the arduous march to Trenton and the vicissitudes of the urban battle that followed, Tucker (Barksdale's Charge: The True High Tide of the Confederacy at Gettysburg, July 2, 1863, 2013, etc.) appears to have missed no detail: the varying intensity of the snow, sleet and wind; every feature of the topography; the positioning of each cannon; the nuances of the attack and the counterattack. He’s out to explode some myths, especially the supposed incompetence of Hessian commander Col. Johann Rall and the holiday drunkenness of his troops. Tucker also highlights overlooked aspects of the fight, such as Washington’s distinctively American battle plan (employing guerrilla tactics of frontier warfare and anticipating artillery tactics perfected by Napoleon), the unusually varied composition of the Continental Army and the crucial roles played by some of Washington’s top lieutenants, particularly artillery commander Henry Knox and mariner John Glover, who supervised the crossing. As the story unfolds, Tucker supplies numerous minibios of battle participants—some names that would loom larger in our history (Alexander Hamilton, James Monroe) and others (the rakish Tench Tilghman, French and Indian war hero John Stark) now mostly forgotten. Although marred by far too many repetitions, hackneyed locutions and a tedious insistence upon his various theses, Tucker’s account brims with colorful information—about the delicacy of Washington’s military maneuver, the double envelopment, about a female sniper firing on the enemy, about “the solid Hessian wall…of walking muskets”—that vivifies this pivotal episode in American history.

Of most interest to military historians and Revolutionary War buffs.