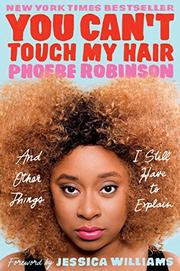 YOU CAN'T TOUCH MY HAIR

And Other Things I Still Have to Explain

A black female comedian lays it all out there.

Stand-up comic and co-star of the WNYC podcast 2 Dope Girls, Robinson has a lot to complain about, starting with the need people have to touch her hair. In case readers fail to pick up on her humorous vibes regarding hair, the author includes a second chapter on the history of black hair in film, TV, and other media. Throughout the book—a hybrid of humor, truth-telling, and poking-fun-at-life-in-general—Robinson delves into what it means to be a woman and black and, more importantly, a black woman in today’s American society. Filled with references to pop culture and plenty of hashtags, the narrative addresses issues like how to avoid being the one black friend in a group of white people, the difficulty of being hired to play a role in a show because you’re either too black or too light, and why NFL players need to treat women better. She gives readers her list of nine guilty pleasures (No. 1: “Ranking Members of U2 in the Order of Whom I Want to Sleep With”; The Edge is first) and a list of demands for a future female president, including penalizing those who perpetuate the thigh-gap obsession. She also explains why “Lisa Bonet is Bae. Queen. Jesus” and waxes poetic on why she takes her laundry home to her parents’ house. “If a person were to play [the dryer] in a movie—don’t ask me why—it would be played by Meryl Streep,” she writes. “The dryer is that damn good.” Although the humor is forced and tiresome in places, Robinson does hit the mark on some important issues, and fans of her podcast will enjoy the book.

Up-and-down humor that sometimes gets to the heart of the realities of being black in America.